The Little Robotics Team that Could 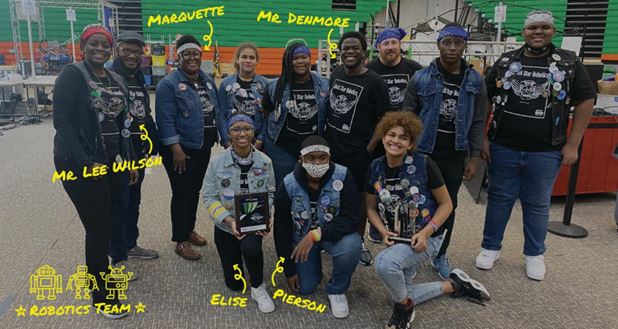 An inspiring thing happened recently in Tallahassee, unrelated to the Florida Legislature.

The team, known as RockStar Robotics—clad in jean vests and bandannas to match their theme—were underdogs from the start. Worryingly, the robot they had painstakingly constructed every Tuesday, Thursday and Sunday for three solid months had faltered its first time out of the gate, a week earlier in an Orlando competition.

“I take responsibility for that,” said Pierson, the 8th grader who served as the robot’s programmer and driver. “The robot wouldn’t rotate, because I had inverted things in the program.”

His 10th grade teammate, Elise, RockStars’ Second Driver and Builder, also took ownership. “I had overcomplicated things in the construction, and the intake to collect the balls had a dead zone.”

In Orlando, the team had placed a disappointing 33rd out of 60. Not abysmal, but they knew they could do better.

In the intervening days, they scurried to make repairs, but were unsure that their robot would be able to complete the required tasks as they boarded the van for Tallahassee.

Adding to the tension, most of the teammates had never competed on this level before. Elise recalls, “two years ago, we had literally just rolled our robot out of the van when they came on the loudspeaker and announced that the state competition was cancelled due to COVID.”

Not only was Tallahassee their first state competition, most of the team had never traveled away from their parents before. That part turned out to be pretty fun, though, with the expected hi-jinx of a sleepover.

“One girl, hopped up on sugar, woke me up at 1 am dressed as Casper the ghost, the night before finals” said Elise. “Another insisted on listening to rainforest noises all night.”

“Everyone sure looked tired at breakfast,” said Pierson, who liked the make-your-own waffles. His mom had told him that the 3-night getaway would count as his vacation this year, and he was determined to savor it.

Finally, it was game day.

40 teams showed up from around the region. The RockStars sized up the competition. Most teams dwarfed them in size, with at least 50 teens and 10 coaches. Some, sponsored by school districts, were flush with federal stimulus money—RockStar had built their machine on a shoestring. Others brought along entire cheering sections. RockStar had 3 fans in the stands.

“But Mr. Denmore can cheer louder than anyone,” laughed Elise about the Club’s teen director chaperone.

Mr. Lee Wilson, an engineer with Universal Orlando, and the team’s coach of 12 years, gathered the RockStars in for a pep talk.

“Remember—gracious professionalism,” he said. “Yes, play to win, but above all, play with honor. You’ve prepared for this.”

Pierson took the remote and drove the robot onto the course.

It was immediately apparent that, unlike at Regionals, this time RockStar was in the zone.

Pierson smiles, reflecting “It felt great. Everything went just as it should.”

The robot shot and scored, over and over, Pierson using the joystick to gracefully navigate around defenders. Then, the machine gracefully hoisted itself onto the monkey bar apparatus, swinging while supporting its own weight.

Mr. Denmore cheered like a maniac. Marquette, Elise’s mom and assistant coach, said everyone wanted to know who “those kids from Orlando” were.

The most impressive thing, however, wasn’t the robot’s performance. It was what happened when one of the competing robots failed to start. Instead of seizing on their advantage, the RockStars teammates and others huddled around the stalled bot, and harvested spare parts from their own supplies to get their opponent operational.

“That made me prouder than anything,” said Mr. Lee.

In the end, RockStar placed a respectable 8th out of 40 teams in the technical competition and were awarded the coveted “Team Spirit” award, for their energy, determination, and, you guessed it, gracious professionalism.

“We were the Little Team that Could,” said Marquette.